Wi-Node, Open Hardware ramblings - and the Nanode with Two Brains 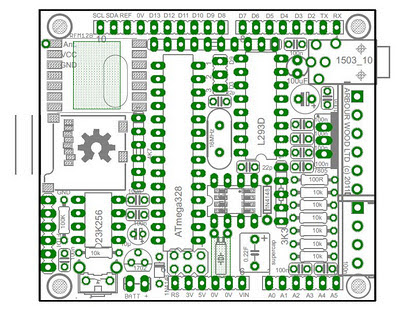 Our lives are full of wireless gadgets these days - so with the advent of low cost wireless transceiver modules from Hope RF - I decided to add another wireless gizmo to the list - and so Wi-Node was conceived.

Wi-Node is the starting point for building wireless connected projects- in the same way that Nanode is a dev-kit for internet connected devices. Wi-Node has been produced in the same style as Nanode - as a through-hole kit, with minimal use of surface mount devices, such that most people who have done a little basic soldering and electronic assembly can put one together.

Wi-Node follows hot on the heels of Nanode, and it took some while to ponder the various options, and feature set to produce a device that would be useful in a wide variety of different applications.

It's got the familiar Arduino shield connectors, and a socketed ATmega328. Then there's the wireless transceiver - an RFM12B from Hope RF. In addition there are further options, including a micro SD card for datalogging, a real time clock, a SRAM with battery or super-capacitor non-volatile back-up and a motor driver IC - so you can drive dc motors, relays and steppers straight off the one board.

A couple of things quickly became apparent, the existing Nanode really needs a shield or "backpack" which provides additional functionality and features. The idea of the first Nanode "backpack" was announced a few months ago, and then sat on the back burner, whilst I attended various conferences and makerfaires promoting Nanode.

My social calendar - and Nanode's for that matter - was fully booked all summer, and well into October. What with keeping up with the kitting of large batches of Nanodes to meet the sales demand - my spare time was fairly tight.

However, last weekend, I managed to spend the whole weekend with my CAD application - and managed to rattle out a couple of new designs - one of which is Wi-Node, and the other is under wraps for at least another week or so until the pcbs arrive and have been test 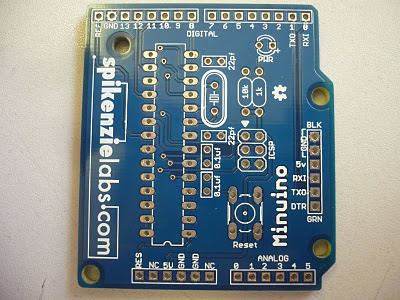 The revelation came to me when I was looking at a Minuino - a half sized Arduino clone board, by Spikenzie Labs - which was handed out as a promotion in the goodies-bag at the Open Hardware Summit in New York - in mid September.

Minuino was about as minimum as an Arduino can get - the ATmega processor, a crystal, a LED a few caps and a reset switch - very similar in content to the RBBB or the stripboard Arduinos I built a couple of years ago. Add the ubiquitous FTDI header for programming and you have a very low cost 'duino.

Whilst pondering the minimal nature of Minuino, I happened to sit it - as 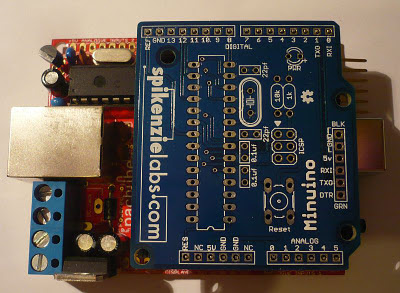 It then followed on from this idea, that the shield or backpack could be designed around any processor one wished, for example, a larger ATmega, and ARM or a PIC - and this would effectively be a processor upgrade for the humble Nanode. The much maligned (and misaligned) set of shield connectors effectively becomes the system expansion bus - and all you have done is add a new cpu card. I'm probably showing my age now - but it is important to reflect back upon earlier days, and realise that all Arduino is, is a homebrew computer with a different bus.

But why stop at Nanode? - any of the older Arduinos where the processor is socketed, could have a new processor grafted in - and the remainder of the Arduino board, just becomes a power supply and serial communications platform. In some cases this might appear to be a fairly pointless exercise, unless your platform happens to be a Nanode, and you want to use it as a Internet connection to the transplanted processor. 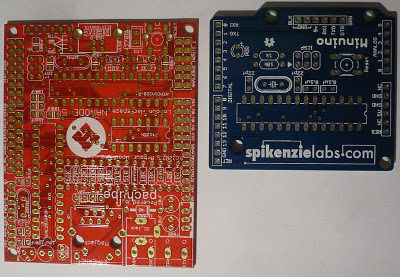 So thus was born the idea of the "Smart Shield" - where the shield has its own processor and hardware goodies on board - which when added to an existing Nanode - with it's processor popped - becomes a serious upgrade for the Nanode and a major boost in functionality.

It was here that I was reminded of the cult college film Steve Martin's "The Man with Two Brains" - effectively what I am proposing is the equivalent of a "Cranial Screwtop" for Nanode - if you don't know what that is - watch the film - or google it.

Moving on. What would you want to add to the Nanode to improve its functionality (and don't all shout a Wiznet W5100)?

I conducted a straw poll of the Nanode Users on IRC, and the top four answers were:

So with a little help from my friends, I have added all of these around a ATmega328 , and crammed it all onto a 55 x 64 mm pcb (plotted above) - which looks remakably like a shield - or - backpack - or whatever.

But wait a minute - if you pop this backpack off of the Nanode, you now have a standalone wireless node, which can be deployed in its own right, anywhere around the home or garden, and communicate back to the Nanode, and so up to the web. And so thus Wi-Node was born - a dual purpose board that can act as either a shield or a standalone device.

So here's some specifics on Wi-Node

Points 7 and 11 are probably worth a little more explanation.

The Wi-Node has been laid out to take a L293D - which is a popular dual H-bridge power driver IC - as used in the Adafruit motor shield. However, if you look at its pinouts, it is possible to fit four economical N-FETS in its place - if you only want 4 channels of low-side drive for relays etc. If you want full direction and speed control of two motors, or one stepper - then you fit the slightly more expensive L293D.

The point is - you have that option. Wi-Node is going to be released as a low cost pcb, with various build options to suit the individual application requirements. If you are building a wireless heating controller, you probably just fit FETs for driving relays. If you want to build wireless controlled robots - the dual H bridge is likely to be the best option.

Wi-Node is pitched at the intermediate builder who wants to try their own creative ideas around wireless and Nanode - but without having to produce one's own custom pcb.

There will be a basic kit of parts, plus a set of options. Wi-Node was designed to fit into an off the shelf plastic case - and this will be offered separately as an option. Other options include

All of these options use standard components from a variety of mainstream suppliers - such as Sparkfun and Newark in the US, and Cool Components and Farnell in the UK. So if you want to buy a basic kit first then expand later at your own pace - then that's easy to do.

Wi-Node will be available towards the end of November, priced around £20 for the basic kit, and options costing between £2 and £5.50 each.

As you effectively need two Wi-Nodes to talk to each other - one as a shield on the basestation, and the other as a remote node - there will be a special bundles offer of a node and shield pair for £30.
Posted by Ken Boak at 1:17 pm

Looks great! I'm wondering how Wi-Node can connect to the Internet.