Brew your Own Power! 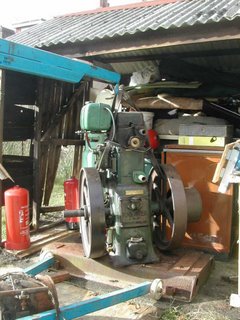 It's been a couple of months since my last entry, but perhaps this is because I have been busy working on my DIY, vegetable oil fuelled home heat and power system, and lending a hand to others engaged in similar works.

Having rebuilt the valve gear on my 1950 Lister CS engine and got it running again in February, it has now been partly installed in my shed and awaiting the arrival of the 5kW alternator from China.

Here the Lister engine weighing 330kg is being craned onto the old steel baseplate that will hold it and the alternator together as a complete generator assembly. We had to take the side off the shed to get it in!
www.powercubes.com/listers.html


Mark Walker at Volvox Engineering has been very helpful in sourcing alternators, engines and spare parts for this project.
http://www.volvoxengineering.com/Products.htm

In the meantime I made a visit up to Leeds, to see a similar installation by friend and homebrew power Guru, Andy Mahoney. We worked on it for a couple of days together and made a new exhaust heat exchanger, to capture some of the waste heat from the exhaust gases and contribute to Andy's central heating system.

This weekend I hope to be casting the large concrete block that is required to hold these engines down. The alternator has arrived at Southampton from China, after 3 weeks at sea, so I hope to have that installed by the end of next week.

These original Lister CS diesel engines will burn waste vegetable oil with very little modification. All that is required is to heat the oil using a copper tube wound around the hot exhaust. This pre-heater coil, warms the oil to about 80 C, at which point it begins to flow with the consistency of normal diesel fuel.

TheLister single cylinder slow speed diesels are a rugged source of dependable power, and the 6hp engine can generate approximately 3kW of elecricity, and 6kW of waste heat, that can be used for water heating and central heating.

A litre of waste vegetable oil will produce about 2.25 units of electricity, and 5kWh of heat, which is about half a tank of hot water, and that's worth 33p at today's electricity and gas prices.

My engine was bought from ebay last year for about £250. The rest of the equipment will cost approximately £1000. I am looking to have a 5 year pay-back on this, and then I will be effectively free from the spiraling costs of natural gas and electricity in the UK.

As well as producing my own heat and power, I have also worked hard to minimise the household electricity and gas bills. So far the figures for the last six months suggest a 13% decrease in gas usage and a 26% reduction in electricity consumption.

My methods have also been applied elsewhere, in helping to reduce my father in law's electricity bill from almost £220 per quarter to £120 per quarter. This was fairly simple, just an immersion time switch and lagging jacket on the hot water cylinder and a little education about turning things off. The sad thing is that he had been accepting £800 per year electricity bills as normal, for the last 4 or 5 years.

You can never act soon enough to make savings on your utility bills, especially now that we are to be fleeced again by the electricity and gas companies.
Posted by Ken Boak at 8:25 am No comments: