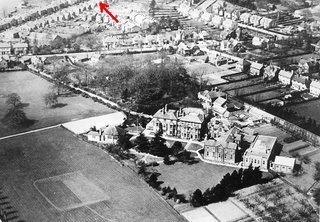 Yesterday, August 18th, 2006 was the 6th anniversary of Elaine and I moving to our house in Suburbia.

This house was typical of those built at that time in the expanding towns. This ariel photograph from the 1930s shows the surrounding area - our house arrowed in red.

The house was built in 1905, at a time when Britain was fuelled by coal, and powered by steam. This is reflected in the design of the house, where each room was intended to be heated by an open fireplace, burning coal.

In the kitchen was a range which provided fairly primitive cooking facilities, and possibly a small oven. In 1905, having a kitchen, in a separate extension to the main living room would have been the height of modernity. Thirty years earlier there would have been no kitchen and all food preparation and cooking would have been done in the back parlour.

In 1905, the only water supply was from a single cold tap in the kitchen, usually set over a Belfast sink. The water pipe also went to the cistern that flushed the outside toilet, and also to the large galvanised water tank in the attic.

There is no evidence to suggest that the house had hot water, when first built. Water would have to be heated in a kettle over the stove. A hot water supply was added later, using a cast iron back-boiler, that was placed behind the grate of the fireplace in the living room. Copper pipes, chased into the plaster, carried hot water upwards to a tank in a cupboard in the first floor bedroom. The system ran using the principle of thermosyphoning, where the lighter hot water rose up into the top of the tank, displaced by the cooler water that descended to the boiler from the bottom of the tank. The system was simple, as no circulation pump was needed - ideal for the 1920s when there was no electricity, but of dubious efficiency. How much coal would be needed to properly heat the 25 gallon tank?

Life was fairly straightforward in the early years of the 20th century. Redhill was a thriving railway town, within 30 minutes commute of the centre of London. The town was full of shops and traders of all nature, and only a half mile walk away. Shopping would have been done several times a week, based on the fact that before refrigerators, food would not remain fresh, and before car ownership, there was a limit to what could be carried back from the town centre. Most traders would deliver larger items by horse and cart, in particular the coalman, weekly with sacks of coal. Bakers, fishmongers and milkmen often sold their provisions from horsedrawn delivery carts in the outer lying areas of the town, effectively capturing more custom from those that could not get into town, such as the elderly or mothers with young children.

In the 1880's, the road was laid out, on a former orchard. Plots were allocated, of roughly a tenth of an acre, most being 20 feet wide and 250 feet long. The tenth acre plot allowed plenty of garden for growing vegetables, keeping chickens and the like. It is rumoured that a long gone neighbour once kept pigs in a sty at the bottomofthe garden.

Judging from the mix of house styles in the street, and the dates on some of the houses, the road was developed by several builders over a period of about 30 years.

The house is solidly built from traditional materials, and much of the builder's skill is evident on what they could achieve with just 4 or 5 basic materials; brick, slate, mortar, timber and glass.

Built at a time when coal was cheap, there was no real need to have a good level of insulation, and so the outside walls are a 9" solid brick construction. The slate roof was laid without an underfelt and so the attic space was cold and draughty in winter and unbearably hot in summer.

Over the last 100 years, about 4 families have lived in this house, with each successive owner making improvements, to suit changes in taste or fashion, and to improve comfort. My intention is to improve the property in such a way that reduces its energy requirements, lowers its carbon footprint, and allows life to continue according to a Sustainable Roadmap.

The construction of the house is not ideal for energy reduction, but as it was built with a very low standard of insulation, large improvements could be made. The attic rafters space can be insulated with a modern insulation board that will considerably reduce the heatloss through the roof.

The 9" solid brick walls are not particularly good from a heat loss point of view, but the thermal mass of the internal walls and chimneys, is good at retaining heat over long periods and this helps to stabilise the room temperature.

Last year, an efficient natural gas heating boiler was installed, and this has reduced the gas consumption from 20050 kWh to just 16400 kWh in this last year.

Solar water heating has allowed us to turn off the gas water heating for the whole of the summer, and so daily gas consumption has averaged just 1.5 kWh per day - all of which is attributable to cooking.

Electricity consumption is also much reduced, from 3812 kWh last year to just 2915 kWh this year. This is as the result of turning off unused appliances such as TV and video, fitting low energy light bulbs and making sparing use efficient use of low energy washing machine, dishwasher and kettle, all of which heat water by electricity. The 3kW immersion heater that once heated the hot water tank, and used a lot of electricity throughout summer 2004 is now very seldom used.

A shower has also been installed, that has reduced our daily water usage considerably, using just 20 litres of water at 38 degrees C, compared to a bath which was typically 135 litres. It's even better when you realise that the shower has been entirely heated by solar energy.

Now that I have minimised the existing fossil fuel consumption of the house, the next stage is to install renewable fuel systems, that will further reduce the fossil fuel footprint of the house and yet maintain a comfortable and rewarding lifestyle.

Over the next few posts, I hope to discuss my Sustainable Roadmap, and the implications it will have on life in Suburbia.
Posted by Ken Boak at 2:14 pm 2 comments: 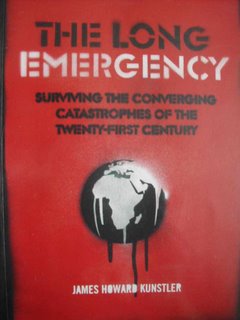 The Long Emergency is the term given to a series of converging catastrophic events identified by author and analyst James Howard Kunstler.

His book, written in early 2005, describes the world events brought about during the age of cheap oil, and the likely consequences for all of us, as we now move inexorably into an era where oil is no longer cheap.

Kunstler examines world history over the period of the last 200 years, and identifies the processes and events that brought about a world economy fuelled by and entirely reliant on continuing supplies of fossil fuels.

World oil production is in terminal decline. Natural gas reserves have already peaked and yet we are all still "sleepwalking into the future" - a future without oil.

Kunstler focusses mainly on the suburban American lifestyle and the effects that a forthcoming oil shortage will have on it, but for anyone reading this book in the western world, the outcome is likely to be the same.

Depressing, fatalistic and apocalyptic, Kunstler's examination of the modern oil dependant lifestyle, reveals the truth about the route we took to get to this situation, and points out that the options for our exit strategy are extremely limited.

The Long Emergency was a gripping read. I can recommend it to anyone who wants to awaken from a century of sonambulism.
Posted by Ken Boak at 12:23 pm 1 comment: