An Arduino's Not Just For Christmas - but for all in 2010 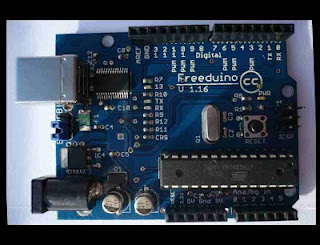 I've been playing around with Arduino's for just over a year, having discovered them whilst researching low cost computing tools.

How can a little microcontroller board like this become a life changing device?

The Arduino is a classic case of something which exceeds the sum of its parts. On one level, it's just a cheap, 8 bit micro built on a board with some I/O and an accompanying programming environment. On an other level it's a unique tool which brings open source computing and programming skills to many different communities and professions.

A low cost computing device, plus the backing of a huge online community has helped develop an open source product rapidly turning it into a successful phenomenon.

Online communities, and social networking groups are actively bringing people together who share common interests and have brought about changes in the way we work and the way we interact with other people and organisations.

In the last year I have become a member of three or more online communities, who all use Arduinos to perform various tasks. The Homecamp Community are interested in changing the way we use energy in the home by way of increased awareness of our consumption. They also have an interest in re-purposing (hacking) consumer goods to give them modified functionality, or just for fun.

Through some of my Homecamp friends, I was introduced to the London Hackspace at an Open Source Hardware conference in early December. The guys from the Hackspace also use Arduinos, and are involved with other OpenSource projects such as the MakerBot. Last week, for one of their monthly meetings in London, arranged a beginners session for the Arduino at the Trampery - a "Co-Working" open office in Shoreditch.

In just over an hour, you learn how to blink an LED, use the Arduino to control the brightness of the LED, interface to a switch and control a process with an input from a potentiometer. The workshop was practical and hands-on, and avoided over-complicated lessons in the C programming language. These can come later for those who want to take it further.

Working, by necessity, in central London, comes the advantage that you are never too far from meetings at social get togethers. This was something I had failed to appreciate in the 20 years or so I desperately shyed away from London commuting. I now take the attitude that if i must travel up to London on a daily basis, I might as well make the most of the evenings up there, avoid the evening commuter rush and meet a few new people.

In addition, I use the Arduino at work as a development and prototyping aid, because its quick cheap and simple to get something up and running. Whilst I am not a natural programmer, I do amaze myself how quickly and with very little effort you can develop applications on this device. It's handy because of it's portability. Just plug into your laptop, wherever you might be, hot-desking or on the train, and you can spend a little time developing.

So, crystal-balling, for 2010, what new direction will this open accessible physical computing take us in?

Already the Arduino community are extending their programming environment and hardware to make larger more powerful microcontrollers available. A whole new community of non-programmers is being introduced to the C programming language and its unique ease of portability. The Arduino is being extended with Ethernet and web connectivity, and interfaced to mass memory and USB devices. Wireless connectivity through Zigbee, Bluetooth and other standard are making Arduinos portable and no-longer tied to the back of a laptop. The basic Arduino with web-connectivity can form the core of a monitoring and control system that can be accessed from a browser anywhere in the world, and from a variety of platforms, - soon you will be able to check your household electricity or gas consumption from an Iphone app. Arduinos are already tweeting information around the net. For the techie, the Arduino has laid the groundwork towards the £10 internet-enabled computing device is likely to appear sometime this year, in a form that can be built into many innovative products.

The Arduino or its successor- which I'll call Arduino 2.0 or Webduino, once coupled with web connectivity, brings firstly to the technical community, and later to the wider consumer market the enabling technology of microcontroller with always-on web communications. This combination of control and remote communications will find its way into many products and environments - and give further fanning of the flames to Web 2.0 - the Internet of Things.

On a larger scale, key companies in Shoreditch's "Silicon Roundabout" phenomenon, clustered around the Old St. tube, have recognised the usefulness of the Arduino and at least two are using it as part of their business. These organisations are getting together with other groups and offering starter courses and evening workshops - to bring the technology out to a wider audience.

So the humble Arduino, combined with social networking groups, new communications methods and the occasional meet-up in town can bring a whole new dimension to the life of the technical-curious.

Links to topics mentioned above 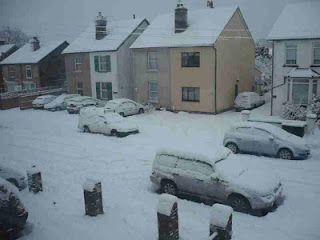 Finally, after a month of cold, sub-zero snow and icy weather - we are now back to a state of liquid water.

Whilst in the south east, the thaw really started at the beginning of the week, Wednesday caught a lot of people out. Who would have known that just 1 or 2cm of fine powdery snow would cause disproportionate chaos on the roads and rail network.

I walked down to the station at 6am, in time to catch the 6:13 to Victoria. It was still snowing, and the combination of fine powder snow and the third rail electrical pick-up system used on the Southern trains, made for a commuting disaster area.

A layer of compressed snow was building up between the pick-up shoe and the conductor live rail. When the train tries to pull off, all you get is arcing and the traction computer goes into restart. After 3 false starts and loads of intense white arcing we finally got moving at 06:45.

However, because we were the first train north out of Redhill, we had 3 trains loads of customers on board - and it was breathing room only. To make matters worse, the train was only 4 carriages.

After a very uncomfortable 45 minutes on board - I got to London Bridge, where fortunately I almost immediately caught a South Eastern Train to Charing Cross. Fortunately because of my early start, I avoided much of the ensuing chaos as rush hour approached.

By the late evening the network was running well. I got a 23:12 out of London Bridge, and a 23:30 from East Croydon back to Redhill. I had had visions that I might be sleeping on the sofa at work, if 'd failed to get home that night.

By Thursday the big thaw was on, and by Friday most of the snow melted from Monson Road. I can now actually see my garden again for the first time in 10 days. 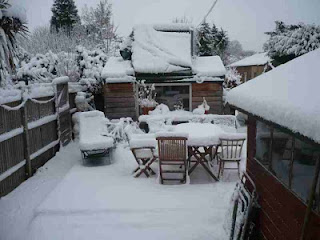 The Council now have absolutely no excuse left why they cannot empty my bin.

Lessons need to be learned about how to cope in this unusual weather. Councils should be mandated to store 4 weeks of salt, every year. Schools should not shut at the first sign of a few snowflakes - on health and safety grounds. What do the kids do when it's snowy? Run around in the snow, chuck snowballs and go sledging. It's a lesson in life that we just have to chill out in snowy conditions, apply some common sense and just get on with it.

I suggest we withhold our Council Tax for the period of December and January - they certainly have done nothing to deserve it. No schools, minimum road gritting and bins that have festered since mid-December.