Building blocks for the Internet of Things. 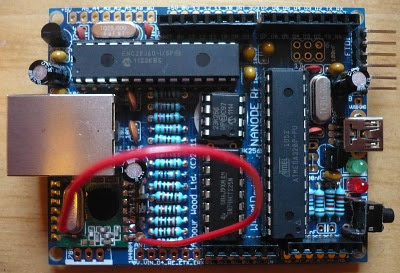 Three years ago exactly, I first got interested in web connected devices. I bought a £100 dev-kit from Microchip, loaded a few examples, but frankly found the technology poorly documented and with a very steep learning curve, I admit I made very little progress.

Undaunted, I took a new job in central London, met a whole host of people with similar interests, through HomeCamp, Pachube, London Hackspace and Minibar and was inspired to develop some of my own ideas into commercial products.

The idea of being able to connect bits of hardware - like sticking Lego blocks together - had a huge appeal. The open source Arduino was trailblazing ahead with a low cost platform and gaining a huge momentum of users and developers. It seemed sensible to produce a compatible platform which is built on the foundations of the Arduino project but adds a whole bunch of new network connectivity functions. Thus was born Nanode - Arduino's well connected cousin.

This week sees the launch of two new product offerings in the Nanode family.

Nanode RF is a much updated Nanode which includes a low power wireless transceiver module - allowing it to communicate with similar networked devices - whilst retaining web connectivity.

Nanode RF also has a real time clock/calendar which can be used to wake up the board at certain times to perform given tasks.

The 32K x 8 static RAM, provides a useful buffer space for storing larger web packets, and also provides a means of upgrading the Nanode RF firmware via the web using a TFTP server.

On the underside of the pcb is a micro SD card socket. This allows a huge amount of external storage - can be used like a disk drive, for holding a repertoire of web pages or as a store for vast quantities of datalogged information.

Nanode RF has conventional Arduino shield connectors, and like Arduino provides a variety of analogue, digital and PWM I/O Pins.

Like the Nanode 5 predecessor - Nanode RF uses predominantly through-hole construction, and may be built form a kit, with a simple pictorial assembly guide and basic soldering skills.

Nanode RF can also be purchased as a fully built and tested board - the Nanode RFX is a maxxed out board with all options fitted.

To complement the Nanode RF - who's role is that of an ethernet connected gateway or basestation, we also introduce a low cost sensor/actuator node: WiNode is a low cost wireless node aimed at networked wireless control, monitoring and actuation applications.

WiNode is also available as a kit, and retains much of the functionality of Nanode RF, but without the ethernet connection. 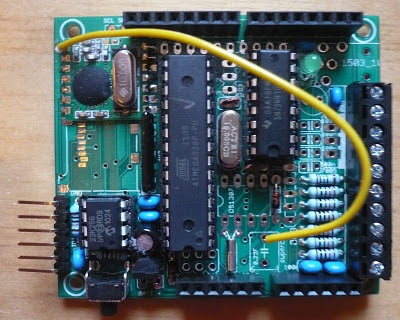 WiNode - A Wireless Network Sensor Actuator board - based on Arduino technology.

WiNode has four analogue inputs - buffered for voltages of up to 18V, and four high current (2A) digital outputs. These signals are accessed through the easy to connect screw terminals.

The high current outputs may be used for speed control of 2 dc motors, or high current loads such as relays or high brightness LED lighting. The 4 outputs can also be used to drive a single stepper motor.

WiNode has the 32K x 8 SRAM, the real time clock/calendar for task scheduling, and when fully populated will accept the micro SD connector for stand alone datalogging applications.

Unlike Arduino, the Nanode and WiNode products do not have the serial programming IC on board. Instead we have produced a customised budget programming adaptor. This allows automatic programming of Nanode products using the Arduino IDE software environment.

Nanode and WiNode products can be purchased online. We currently accept orders by PayPal.

For more details, contact me, Ken Boak at nanodenanode at gmail dot com

Nanode products are fully Open Source and ethically produced by Arbour Wood Limited - by a collaborative team of friends based in the UK, New York and Shenzhen, China.
Posted by Ken Boak at 8:25 am